Ahh yes, the annual air show in Toronto.  That moment during the Canadian National Exhibition when we glorify the tools of combat as warplanes fly through the sky, officially marking the end of summer.  Right? 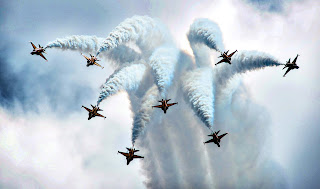 Because during war, planes are always busy making patterns that look like Don King's hair.


No, of course it isn't that simple. It is not exclusively a war show.  People enjoy and are awestruck by it, if only for the athleticism and precision displayed by the pilots.  It's synchronized swimming in the air.

But it has its detractors, plenty of whom would have it banned in a heartbeat if they could, even just for the noise it makes in a residential area, never mind any anti-war sentiments felt.  But let me ask this: how many of the loudest complainers have pursued their passion to the point of building a skill where they can say they are in an extreme minority in their prowess?  Probably not too many.

Of course, warplanes have killed people.  And for some, especially now in a city with thousands of refugees, it is a trigger for trauma, as that sound of a warplane in their country of origin would almost always be followed by the sound of bombs, people screaming, and hundreds of lives ending in an instant.

But here is something literally nobody is talking about.  I was on a lovely walk through High Park with a friend, and one of the airplanes made a peace sign.  Let that sink in: the international symbol for pacifism was drawn by a warplane, and nobody seemed to notice.  One pilot decided to make his statement on the validity of air shows in 2016 with this grand gesture. 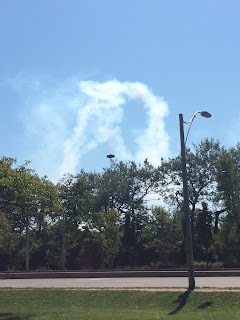 Rachelle Janicki
Put this on the front page, and hippies everywhere may go through an existential crisis.

Clearly what's happening here is a re-imagination of the function of a warplane.  It's not unlike the white poppy.  It, too, offends people, especially those who lost relatives or even fought in a war themselves, as the red in the traditional poppy symbolizes the blood shed for our freedoms.  But the white poppy isn't intended to minimize that.  It recognizes it, and additionally intends to provide the message that war isn't the only method of transportation to peace.  Just ask Václav Havel.

I'd love to hear from actual refugees about this. This article in the Toronto Star has gained some traction, but this far more balanced editorial is the closest thing to an official response from someone from a war-torn country, and even she doesn't advocate closing shop.  But these are people speaking for the refugees.  We need to open up the dialogue with them and listen carefully, while telling them about our traditions.  After all, the reason why we have an airshow every year is to commemorate those who gave their lives to ensure a safe haven for these refugees in which to live some day.

But if this really is a "nuisance" for the majority, then maybe we should be like Switzerland and have a public referendum on this.

In the meantime, this collection of responses to the Star article display a variety of opinions on the matter, which is healthy in a democracy.  This shows that the national dialogue on the subject of tradition versus accommodating new Canadians is alive and well.

Whatever your view on this subject is, just try to find the gray.  It's never as black and white as we think it is.