So I finally saw the Bohemian Rhapsody film a few days ago, and it seems the entire world wants to hear my opinion about it.

And everyone knows just how much I loathe giving my opinion. 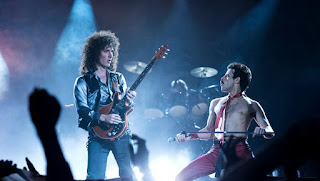 Of course I'm flattered - because I've been absorbed in Queen's music and history for 25 years now, both professionally and for my personal delight, this has people thinking I'm qualified to give a more valid and pertinent review than most.

But that's the problem - I'm so intrinsically connected to this music and their story that I almost feel overqualified to provide an unbiased opinion.  When you're this deep in it, you're usually one of two things: a sycophantic fan boy, or in a position of wanting to show respect and gratitude to the people who have basically provided you with a career.  I'd like to think I'm somewhere in the middle, never wanting to pigeonhole myself into anything I can't safely crawl out of.  But I'd say I'm closer to the latter.

Ultimately I don't feel any more qualified to review this film than anyone else, because I'm but one person in the grand scheme of things; art is designed for everyone, after all.  The same way that everyone eats food, not just bourgeois chefs.

And this is perhaps disappointing for those who want to hear me say it was crap because of all the historical inaccuracies that undoubtedly would have had me wincing every 30 seconds. 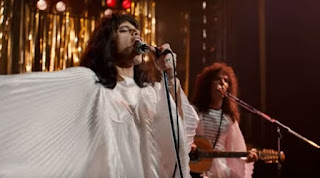 Alas, that's not what happened.  Far from it.  I'd heard enough reaction from people who'd already seen it, so I reset my metric of expectation.  If we've learned anything from previous music biopics, it's that Hollywood is all about entertainment, not accuracy.  If you want accuracy, watch a documentary.  So I went in expecting to be entertained and not much more. After all, understanding the intent of art is often paramount to appreciation of it.

As I sat down in my (strangely more comfortable than usual) cinema chair and was transported back to 1970, all kinds of feelings went through my head.  My life insofar as my history of loving this band flashed before my eyes: hearing We Will Rock You for the first time on a cassette tape lent to me by my grade 6 music teacher, learning how to play it (and the rest of the Queen catalogue) on guitar at some point in the ensuing few years, meeting Brian May for the first time, launching a website about Queen's concert history, playing in my own Queen tribute band in a theatre for the first time, playing A Night At The Opera at the prestigious Massey Hall in Toronto, the countless wonderful people I've met as a result of all of this, and a whole lot other memories, both public and private, that I can't even begin to quantify. 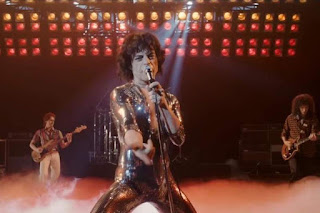 And then I saw the characters who were overall very well cast (the guy playing Brian was uncanny).  And those characters told a story.  Not necessarily Queen's story exactly as it played out - but "a" story.  It was largely accurate, with some fabrications, and some anachronisms to advance the story wherever necessary.  And then there were those two or three scenes that even the most ardent experts on the band would say were complete fiction and never happened.  But shift around the timeline a bit, and maybe that scene where Mercury is begging for his job back is more true than one may realize.  The definitive Queen documentary called "Days Of Our Lives" came out in 2011, and there were plenty of stories told by Brian May and Roger Taylor that hadn't been previously told.  Were those 35 year old stories untrue in 2010 just because they hadn't been told yet?

And of course there were plenty of omissions, but what can one possibly expect from a two hour movie?  It will never be comprehensive.

I'd walked in thinking I wasn't the target audience.  That the film was intended more for people who knew three Queen songs than for people like me.  But by the end of the film, as I watched the triumphant Live Aid scene (which was brilliantly reproduced) with tears in my eyes, it dawned on me that tens of millions of people are now experiencing some semblance of the joy that this music has brought me over the past 25 years of my life.

No matter what we think of the film, its influence on popular culture is already in motion.  As of yesterday, the Bohemian Rhapsody soundtrack is Queen's biggest album in the US since The Game, sitting comfortably at #3 on the Billboard charts.  And another Greatest Hits album of theirs is also in the top ten, making this the first time two Queen albums have charted that high simultaneously.

My adolescent self was bullied incessantly for liking this band.  And now 20 years later, they've never been bigger in my lifetime than they are right now.  Teenage me and current me are pretty thrilled with the idea.  It is a moment I will cherish.