Support act Rival Sons opened the festivities.  The Long Beach, California band's influences almost exclusively lie in 70s rock, making them sound derivative at times, but there were many moments of excellence, particularly in an extended version of the ballad Where I've Been, where guitarist Scott Holiday offered a soulful solo not heard on the studio version.  Singer Jay Buchanan worked hard to win the audience over, and genuinely stated numerous times their pleasure of being the last band to open for Black Sabbath.  For this audience of predominantly 60-somethings, they were exactly the right choice.

The main dish hit the stage a bit before 9pm, with a dazzling video display that eventually revealed the band's logo, leaving the audience mesmerized before even playing a note.  They soon launched into the title track from their 1970 eponymous album, and the faithful in attendance sang along to every word.

Within a couple songs, it became quickly apparent that it would be an uneven performance from Ozzy Osbourne.  Several gigs earlier in the tour were cancelled with the frontman having a bout of sinusitis, but it wasn't a case of him being unable to sing.  Even though most of the songs were tuned a whole step down, Ozzy sung flat for much of the night, varying from song to song.  The front of house sound technician wisely adjusted the frontman's fader to have him a bit lower in the mix than a lead vocal should be, so that his flaws wouldn't be as apparent.

But there's no hiding from it on video:


In the world of opera music, for example, audience reaction to such proceedings would range from utter disbelief to seeking a refund, but classic rock crowds generally aren't as discerning.  If they cheered after every song Led Zeppelin played in 1977 when 100-pound Jimmy Page (on a diet of little more than groupies and smack) was barely able to play on some nights, then they were going to love every minute of this grand event, shortcomings notwithstanding.  With the ever-familiar concert smells in the air, not only does this iconic singer know he can get away with a lackluster vocal performance, every sentence of Ozzy's banter can contain the F-bomb with impunity.  Being an orator is not in the job description, either.

But he still did have his great moments, like his call and response with the audience in War Pigs.  Being in the middle of a crowd singing the soaring melodies at the end of the Nixon era anti-authoritarian war protest anthem is one of the great concert experiences any rock fan can have, not unlike Hey Jude at a Paul McCartney concert.  It is the same common denominator of bringing people together.  And it was extra special this time, knowing it was the last time.

His movements on stage were classic Ozzy at all times, often prompting the audience to sway their arms during most mid-tempo passages, for example.  But he was the one weak link in an otherwise flawless show.  Visually and aurally, it was everything a farewell concert should be.  Stock footage of the band in their heyday was used at the right moments, and the vibe was one of celebration of music that not only defined a genre, but created one.  The setlist reflected exactly what their audience wanted to hear; all but three songs were from their first three albums.  Their next three long players (particularly 1975's Sabotage) showed a great sense of musical maturity, but it was their self-titled debut, Paranoid, and Master Of Reality that pioneered what is now called doom metal.

Guitarist Tony Iommi and bassist Geezer Butler were completely on their game, executing their parts with a surgeon's precision, replicating the album cuts to perfection.  Filling in for Bill Ward, drummer Tommy Clufetos was a faithful servant to the music, and his solo spot in Rat Salad was a show highlight.  For flare and presentation he gets a 10/10, but it was the polar opposite of someone like Neil Peart of Rush who turns a drum solo into the musical equivalent of a Shakespearean play, complete with plot twists, births, deaths, and an exquisite combination of mainstay sections and forays into the unknown.  Clufetos, by contrast, simply offered sheer intensity and power, finally finishing with an ostinato kick drum signalling the beginning of Iron Man, a very effective way of building to one of the many peaks of the evening.

Utility outfielder Adam Wakeman (son of Yes legend Rick Wakeman) added some keyboard and guitar from backstage, but was only really in the sound mix on a couple occasions, notably not in Dirty Women, which should have a pretty vital organ part.

The plus side of the songs being tuned lower was that their sound became even more dark and mysterious.  The main guitar riffs in N.I.B. and Into The Void sounded like pure Satan, just as the doctor ordered back in 1971.

The last song of the set proper, Children Of The Grave, was the only one to be performed in the original key, which is actually tuned down a step and a half on the album.  The band left the stage, with Ozzy sounding tacky as ever while guiding the audience in a "one more song!" chant.  They finished with the staple Paranoid, and the otherwise stoic Iommi cracked a smile towards the end.  He may not have been quite as pleased thirty seconds later, though, as Osbourne forgot the lyrics of the entire last verse, despite having a teleprompter at his disposal. 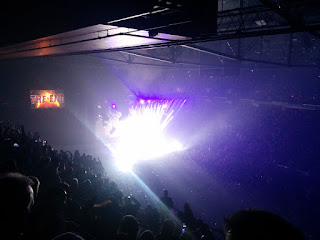 The fans couldn't have cared less.  Black Sabbath were bidding their farewell, and respect for the music and its creators was all that mattered in the end.

Three and a half stars out of five.