We can safely say hell has frozen over.

Rolling Stone had ceased to recognize the mere existence of progressive rock until literally last year, where Rush were finally given their first cover story after Britney Spears had her seventh.  And now they're actually writing about a current band in the genre (the article is well worth the read).  Dream Theater has existed for over 25 years, more or less innovated a genre of music (progressive metal), and sold ten million records without a hit single.  Love them or hate them, they have an audience; a dedicated and passionate one that will fill up theatres anywhere in North and South America, and arenas in Europe and Japan - a feat that few artists have ever achieved. 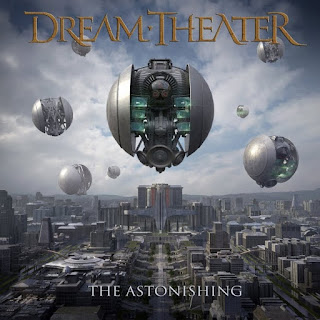 Their strongest albums are almost indisputably Images And Words and Scenes From A Memory.  But lately their biggest flaw has been their almost constant need to put their technical ability before good songwriting, lately to the point that they've almost become a parody of themselves. I've always thought that they could use some healthy outside interference, kind of like Rush did ten years ago with Nick Raskulinecz.  Enter veteran producer David Campbell, whose CV that includes Michael Jackson, Adele, Justin Timberlake, and Muse would make your computer crash.

After a couple listens of The Astonishing, above all else I hear a band bravely making a huge departure from their sound with mixed results - but mostly good. The concept is king, and the technical wankery is restricted to a minimum, as it's always complimentary to the story. Refreshing.

For the first time, singer James LaBrie is the star on a Dream Theater album, with keyboardist Jordan Rudess a close second.  LaBrie sings all eight characters in the story convincingly, and perhaps for the first time, Rudess displays his gifts as an arranger in full. 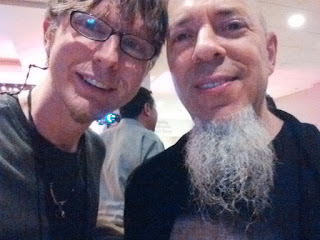 Also, National Geographic recently recognized his goatee to be an entire ecosystem.


John Petrucci is more of a writer than guitar hero here (which isn't to demean his contributions on the axe, but to highlight his compositional abilities), bassist John Myung holds his own as always, but drummer Mike Mangini comes across as pedestrian, which may sound unusual given his technical prowess and feel in other situations (think Extreme).  His sound is so processed and artificial that it almost sounds like a drum machine.  This is my only major gripe with the album.

At their best, Dream Theater are remarkable at what they do, which leaves me all the more sad that Mike Portnoy isn't on it.  Now estranged from his bandmates of 20 years, his playing has a balance of technicality and personality more than pretty well any living rock drummer, with the possible exception of Danny Carey or Neil Peart.

At over two hours long, this album is unlikely to draw hoards of new fans to the Dream Theater fold. But it may finally make people realize that there's far more to this band than long songs where guys play fast. This is the exact opposite. There are thirty-four tracks, and none over eight minutes in length.  There is depth in the storytelling, ultimately making this a great example of a 21st century rock opera.  It may not rival Tommy or The Wall, but if you're into progressive rock and willing to invest the time, you'll very likely find it to be a rewarding listen.

However, like so many double albums, some listeners may find themselves wondering how much stronger it would've been as a single album with a dozen less tracks (people have even said this about the White Album, never mind a Dream Theater album).  There are many hooky songs here (like The Gift Of Music and The Beginning), but they may get lost amidst the many ballads.

So I'm not sure if it can be called "Astonishing".  But it is still very good.

3 1/2 out of 5 stars - their strongest outing since 2009's Black Clouds And Silver Linings.  But their best days are likely behind them.  Albums like Images And Words and Awake are scenes from a memory (see what I did there?).